Your Rating: Not Yet Rated

Average Rating: Not Yet Rated

All ebay results related to this archive: 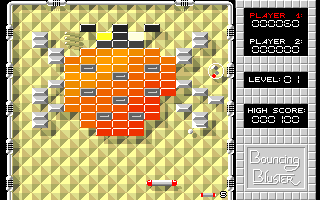 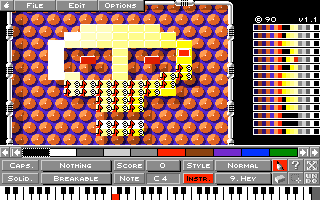 I've always liked Bouncing Bluster, the original shareware version of the game, however it's always had some annoying little niggles to slow you down to get to the treasure within.

It's original shareware release was impressive (the golden fade outs are amazing and I wished they weren't removed in the commercial release) but it didn't run on any system that wasn't version 4.0.

For the longest time, the archive only held the French version 2.0.x, which was fine for gameplay, but for editing levels it slowed you down a bit. I finally found the English translated version 2.0.3, at last in 2013, but the issues weren't over yet. There's a lingering bug that, for some strange reason, you can't hear the music for the introduction or during game play. What on earth is going on? If you click the mouse from the intro to begin a new game, when it asks for a 1 or 2 player game, simply press cancel. Then go to the Apple menu (how nice is the customised neutral grey user interface?) and select "Adjust the Sound Volume". Push the slider all the way to top (MAX) to now hear the music and sound effects. Unfortunately, you need to do this everytime you run the program! If anyone can provide a fix for this, it would greatly appreciated. I thought it might be a bug running from System 6.0.x, but it also occurs when run from System 5.0.4 as well.

Anyway, as an Arkanoid clone it has fantastic graphics and a level editor that really gives you incredible control over designing your own levels, enabling you to make the most of using the IIGS's multiple colour palettes for beautifully coloured playfields, with great colour cycling effects to boot.

Bouncing Bluster II, despite now being able to be run from System 6, includes other improvements, but strangely, other additions that don't make it as good as the original. For one, the level design is MUCH harder than originally found and the default first level is enough to make even seasoned Arkanoid players like myself throw up their arms in frustration.

Another complaint I have is that Bouncing Bluster II, despite adding SoundSmith music to intro screens, doesn't have as a good a sound as the original - or so I thought. The original shareware included neat speech synthesis and other Ensoniq generated tones, but the sequel does not. However, play testing through all of the provided levels for BB II, I came across one that sounded absolutely brilliant - incredibly varied sound effects for removing the bricks. So the problem is that for whatever reason, not all the levels designed for BB II took advantage of how you can specify samples with different pitches for EACH brick in a level design, making their removal almost musical. The original BB1 levels definitely lost their sound effects in translation to version 2.0.x.

But I've finally got around to rectifying that however. For all the levels from the original shareware release, I've now added sound effects. I've also made those levels the default levels for version 2.0 – a little easier, but level 3 is already such a pain in the proverbial that I think I want to create an easier level set. I've made all these improvements to the preinstalled version of the game on:

Enjoy and feel free to share any levels you may have made. Note that the .zip archive on this page includes the original French and English versions of the program as they were originally archived and unmodified.