Your Rating: Not Yet Rated

All ebay results related to this archive:

The first thing you can't help but notice about the new BOOTi is how delightfully small it is. The package it arrived in is miniscule - this is great because not only is the card itself the cheapest disc controller for slot based Apple II's, it also means the shipping costs are also the most cost effective (you may think I'm joking, but living in Australia has meant that shipping costs these days have quite often put me off making a purchase from the U.S.). 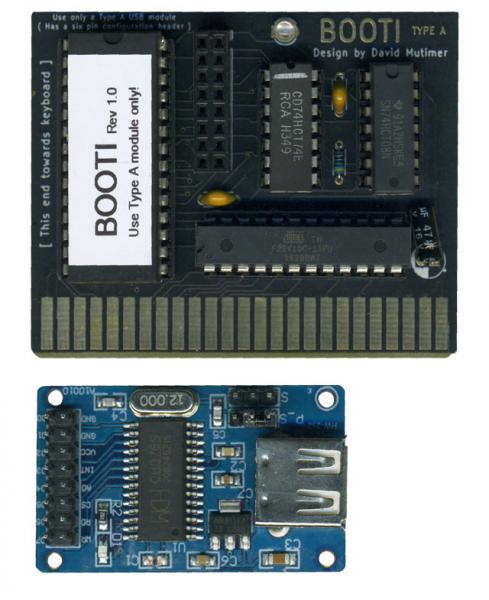 You simply connect the USB module to the card to assemble, plug-in a USB stick and then fit the card into an available slot (slot 7 is always good for disc controller cards). Of course, you'll need to prep the disk images you want to use from the USB stick. A minor note, I found the BOOTi was rubbing shoulders with an old, large RAM card I use, but it didn't seem to affect operation. If you've got one of the new RAM cards from GGLabs, Garret's Workshop or a DarkRAM variant, that won't be an issue at all and having all these nice small cards should ensure better airflow through a IIGS in keeping it cooler.

Moving forward through this review, forgive me referencing the CFFA3000 as a comparison, but it is the gold standard for storage options as far as I'm concerned, but the BOOTi is hundreds of dollars cheaper than finding a second handle CFFA3K.

The BOOTi, like the CFFA3K or FloppyEmu, utilises disk images (ProDOS order, 2image, and raw HDV) which means you can easily switch between multiple different partitions (up to 8 at a time) - far more convenient than being locked into partitions on traditional mass storage devices like hard drive or even the Micro Drive Turbo. The BOOTi has a similar text based control panel to select which disk images to use to the CFFA3K, but it can only be invoked by pressing the C key upon start-up or rebooting. The CFFA3000, in a IIGS at least, will allow you to mount and remove disk images at any time you can access the classic control panel.

The keyboard control based interface of the BOOTi is good, but again not as good as the CFFA3000. You can't use sub directories to store disk images, which is a shame, but not an insurmountable problem. I think the best use of the BOOTi is as a hard drive replacement and is the perfect compliment to a FloppyEmu, which can handle features that BOOTi can't (Full 3.5" and 5.25" disk drive support with 100% compatibility of floppy disk images). To that end, you should really only be including 32meg ProDOS formatted hard drive images. I regularly use around 26 of these images, which easily fits onto a 2GB stick. 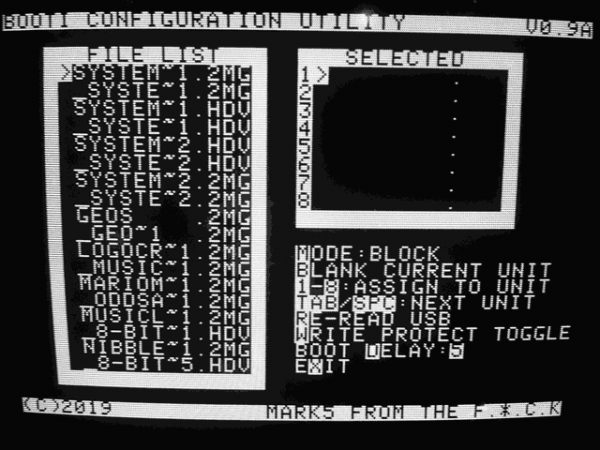 There are some other considerations to take note - you can only use MS-DOS style filenames - 8 characters + 3 letter file suffix that the BOOTi's interface will display. Another limitation is that copying these 32 meg files from a Mac to the FAT32 formatted volume leaves resource "droppings" where it appears each file is split, creating an unnecessary second file with a similar file name except with a ~ in front of it. This does make it confusing scanning through the list of available disk images to mount, but this will be a non issue for anyone using Windows or Linux to copy files to the storage medium.

Developer David Mutimer and firmware programer Marko Ramius have only ever promised ProDOS and GS/OS compatibility for disk images. The first thing I wanted to test were disk images that can be recognised as ProDOS volumes, and work on the Smartport (the hardware and firmware combination that allows you connect to LOTS of volumes) but used custom operating systems. I thought some would work, but sadly, none do. Trying the ROM3 compatible version of the FTA's Nucleus demo or the wonderful Smartport edition of Alien Mind, both failed to launch. Similar disk images that work with the CFFA3000 failed to work on the BOOTi. Having said that though, there are still quite a few 800k disk images that don't work with the CFFA3K either - most FTA, GSA and FUCK demos, Tomahawk, the Hunt for Red October and GATE, as they all rely on the IWM chip to boot, which neither the BOOTi or CFFA3K can access being slot based, but the FloppyEmu can, as it connects directly to the drive port.

A big plus however is that you can use disk images of ProDOS 8 or 16 programs that don't run under System 6 - for example Test Drive II, Hardball, Serve and Volley. So you do get the speed advantages of solid state storage for these titles as well as any other game or app that's incompatible with GS/OS. So in addition to the 32meg hard drive volumes you want primary use of, you can keep quite a few of these types of titles on hand to boot from.

The BOOTi is faster than a FloppyEmu, which is limited to the speed of the drive ports of about 20k a second for read and write data transfer. But every other card I've used, from the CFFA2, CFFA3000, to using the Apple High Speed SCSI card and a SCSI2SD drive and Micro Drive Turbo are all faster. Ron McAdams recently ran some benchmark tests that show the speed of these storage devices.

Given Marko's firmware is still in beta, hopefully some speed ups can be attained. Having said that however, it's always a greater benefit to the speed of a IIGS to be running some sort of mass storage than none at all, which I think is the biggest bottleneck to performance on the IIGS (go for mass storage over an accelerator first!). If you've found the CFFA3000 or Micro Drive Turbo too expensive, then the BOOTi can provide most of the convenience of these cards at the lowest price.

The BOOTi has some unique tricks up its sleeve - you can tell it which mounted volume to boot from by simply pressing a key from 1 to 8 (assuming each volume you mount has a bootable operating system!). You can also use ADTPro's VDrive support - a bit like netbooting. Future features and improvements can be easily added through simple firmware updates as well.

Where to get it?

If you're in the U.S., Chris Torrence is accepting pre-orders for batches of the BOOTi here. $50 U.S.

If you're not in the U.S., you can contact the card's creator, David Mutimer, only on Facebook. Search for one of his posts on the Apple II or IIGS Enthusiasts groups and then direct/private message him expressing your interest. $75 AUS, including shipping.